Winter is Coming. Are You Prepared?

Nothing impacts energy prices quite as much as the weather of different seasons, especially the winter.

Because of the energy market’s volatility throughout the winter months, it’s important to understand what factors influence these large market swings so you can be prepared to make the right decisions that insulate, protect, and capture lows for your business’s electricity and natural gas contracts.

What elements are the largest determinants of electricity and natural gas prices in the winter months?  Read on to find out!

Supply and demand is a fundamental driver of prices for any commodity, especially electricity and natural gas.  The need or demand for energy changes from season-to-season with winter and summer being the most demand-heavy on the grid:

When demand increases, there is obviously more electricity needed to be produced and distributed throughout the grid, which raises the price of it. What may not be obvious, however, is that electricity demand also impacts the price of natural gas due to it being one of the most popular fuel sources for electricity generation! 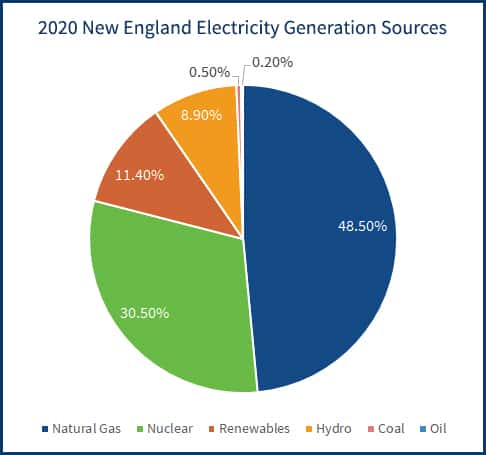 Did you know that natural gas is one of the top fuel sources for generating electricity in the United States?  In fact, it accounted for 48.5% of all New England electricity generation in 2020!

When demand for natural gas rises, prices rise with it.  This increases the cost of producing electricity which in turn increases the price energy buyers pay for it.

Electricity generation plants that use natural gas are also the reason that the electricity and natural gas market move in line with each other, especially in New England.  This is one of the many reasons natural gas storage reports are important to keep a pulse on!

When more natural gas is produced than can be used in the country, it ends up being stored in underground caverns, to be used when needed. When storage gets full, it is a signal to the market that there is plenty of supply.  This puts downward pressure on prices.

Early on in the Covid-19 pandemic, demand for natural gas dropped throughout the entire world.  This halted one of our most valuable exports to other countries, liquified natural gas (LNG).  The reduction in demand created a surplus of gas in the US and contributed to healthy levels of storage as inventories are currently 9% above the 5-year average. 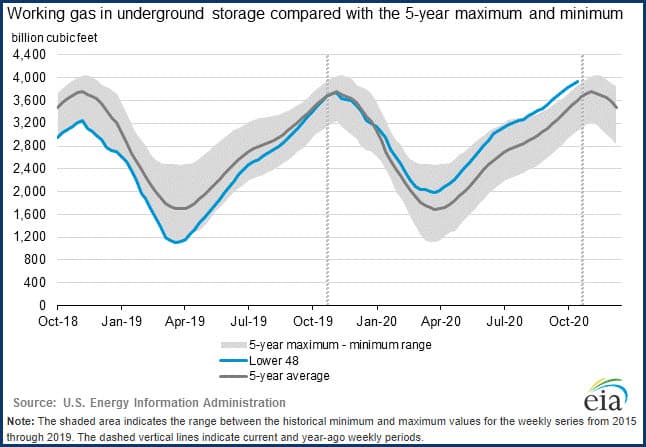 With a rebounding global economy, LNG exports have begun to pick up again, increasing the domestic demand for natural gas and, thus, putting upward pressure on prices.

If the winter ends up being very cold, demand will increase and we will start to burn through what we have in storage.  If there is no production happening during these months, more upward pressure will be added to natural gas prices.

Another huge driver of natural gas prices is one of the two main price components that make up your natural gas supply price, the Basis Differential or Basis for short.

Basis is the cost difference of moving natural gas between two different points, typically the Henry Hub where the NYMEX futures contracts are delivered and your local market area such as Algonquin City-gate (New England, Transco Zone 6 New York, or Chicago Citygate.

Whether it’s consumed by a power plant, factory, or user, a network of natural gas pipelines moves the fuel throughout the country to deliver it to its final destination. 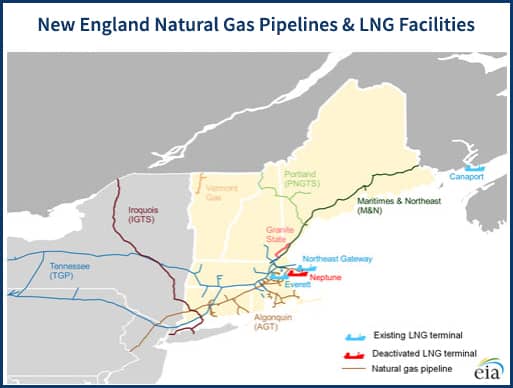 The Basis price is reflective of the difference between each market’s supply/demand equation. In a region like Pennsylvania in which there is a lot of local natural gas production, the high supply tends to push prices down.  However, regions such as New England do not have any local natural gas production and only two major pipelines moving gas to the region, Algonquin (AGT) and Tennessee (TGP).

This, coupled with the region’s large & dense population, creates a lot of demand during harsh winter weather. As the demand for gas grows, upward pressure is added onto gas prices for generation as well as heating.  In order to keep prices in check, new supply needs to come into the market – either from local production or via new pipeline delivery.  If it doesn’t, Basis prices can increase substantially.

As you can see, there are a lot of factors that impact the cost of energy in the winter.  The commonality between all of these mitigating factors is demand.  So, what impacts demand the most?  Winter weather!

One major influence on prices during the winter is the weather forecast.  Electricity and natural gas are traded so predictions and forecasts dictate market movement.  This is called ‘speculative pressure.’

Even though weather forecasts made are never fully accurate, the mere threat of colder or warmer weather will still heavily impacts the markets.

There are a wide variety of winter events that can also impact energy pricing.  Some of the most notable are El Nino, La Nina, and the Polar Vortex.

What are El Nino and La Nina Events?

El Nino and La Nina events occur when sea surface temperatures along the equator change.  When they warm, an El Nino can form.  When they cool down, a La Nina can form.

An El Nino produces warmer than average temps over the west and northern parts of the country while the gulf coast and Florida see wetter weather. The Ohio valley and pacific northwest see drier than normal conditions during these times as well.

Since El Nino weather is usually a bit warmer and drier, buildings on the grid require less heating during the winter which drives electricity and gas prices down.

La Nina winters create more need for heating on the grid, which drives electricity and gas prices up.

A polar vortex is, essentially, a large expanse of cold air constantly swirling around the poles of the Earth.  During the winter, the North Pole’s polar vortex grows and moves cold air south.  When the cold air gets into a strong jet stream, it’s dispersed and often lingers in the northern part of the country, creating more demand and thus higher prices.

You may recognize this term as the polar vortex brought a frigid winter to New England in 2010/2011 and 2014/2015, which significantly spiked winter energy prices!

There are a few factors that determine how and where the polar vortex’s cold air could go including solar minimums and maximums as well as the amount of arctic sea ice.

With winter weather on its way, you should now understand how vital it is to pay attention to future weather forecasts and how the weather creates a massive ripple effect that impacts supply/demand, generation, gas storage, Basis, and, in turn, the price you pay for electricity and natural gas in both the short and long-term.

There is opportunity to capture lows at this time, but there is also potential to hit all-time highs.  Can you pay attention to all these factors by yourself to determine when is the best time to purchase pieces of your energy contracts? Sure, but who has the time for that?

As energy consultants who are a little obsessed with weather forecasts and markets, we take the guesswork out of predicting when to buy during these volatile times. We are constantly looking at all of the factors described in this post (and more!) as well as using our own trading rules and proprietary algorithms to make recommendations of opportune and inopportune times to purchase.

Contact us today for a free electricity and natural gas consultation in which we will perform a risk analysis on your current and future contracts to determine how the winter weather might impact them and how we can help you avoid costs as a result.