10-for-10: Energy Advocacy During the Pandemic

The popularity of solar energy is constantly growing as it becomes more widely available throughout the United States. 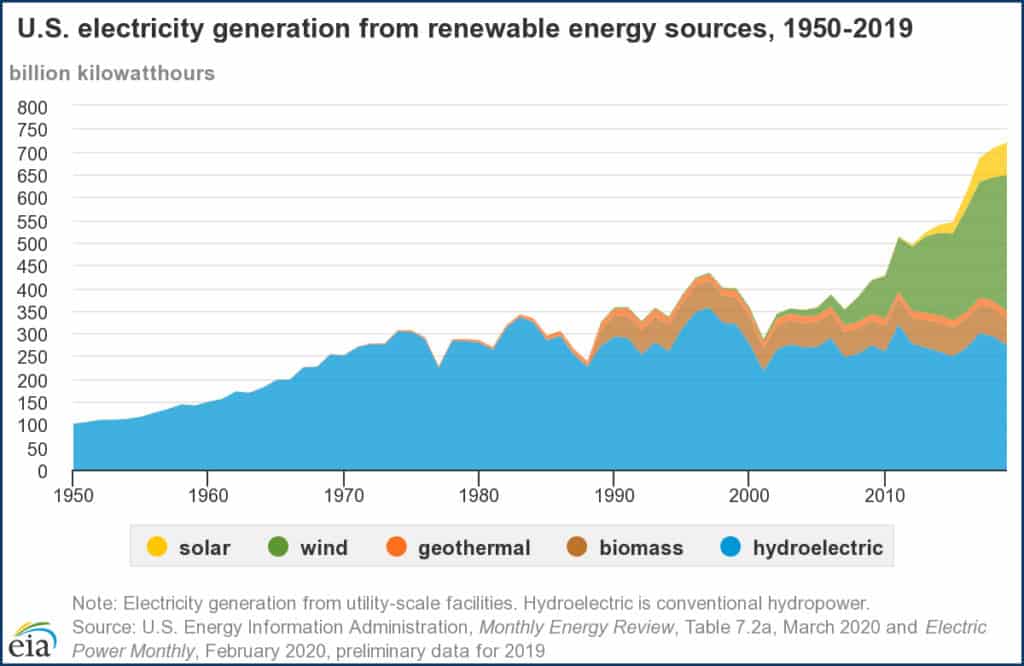 There are a variety of reasons for this increase including more efficient solar technology, price decreases, more purchasing options, government incentives, and easier access to it for the masses.

A variety of programs exist that make solar energy more accessible for communities.  One of the most widely used ones is called virtual net metering or remote net metering.  These projects often come with federal and state incentives for becoming an “off-taker” and help to decrease electricity costs significantly overtime.  However, as one municipality in Rhode Island learned, having a partner to help navigate the implementation and execution of these projects is paramount to experiencing their maximum benefits.

This is where our story begins.

What is Virtual Net Metering?

Virtual net metering is a program that allows buildings on the electricity grid to sign up for access to a community solar project such as a solar farm.

These solar projects do not directly provide electricity to the facility since the panels aren’t usually connected to the meters of program members.  Instead, all of the electricity that is produced by them goes straight into the grid. Buildings in virtual net metering programs receive on-bill credits for the amount of electricity produced by their share.

Let’s look at an example:

A company, Building A, purchases a 30% share from a community solar farm.  In the virtual net metering program they signed up for, they would receive credits equal to 30% of the electricity produced by those solar panels.

If Building A uses 20,000 kWh a month and the solar farm produces 50,000 kWh, their 30% share would earn them 15,000 kWh worth of virtual net metering credits. Then, the company would receive an on-bill credit value for their 15,000 kWh, pay the remaining utility invoice after this credit value, and, in turn, pay their solar developer a discount for the credits received. 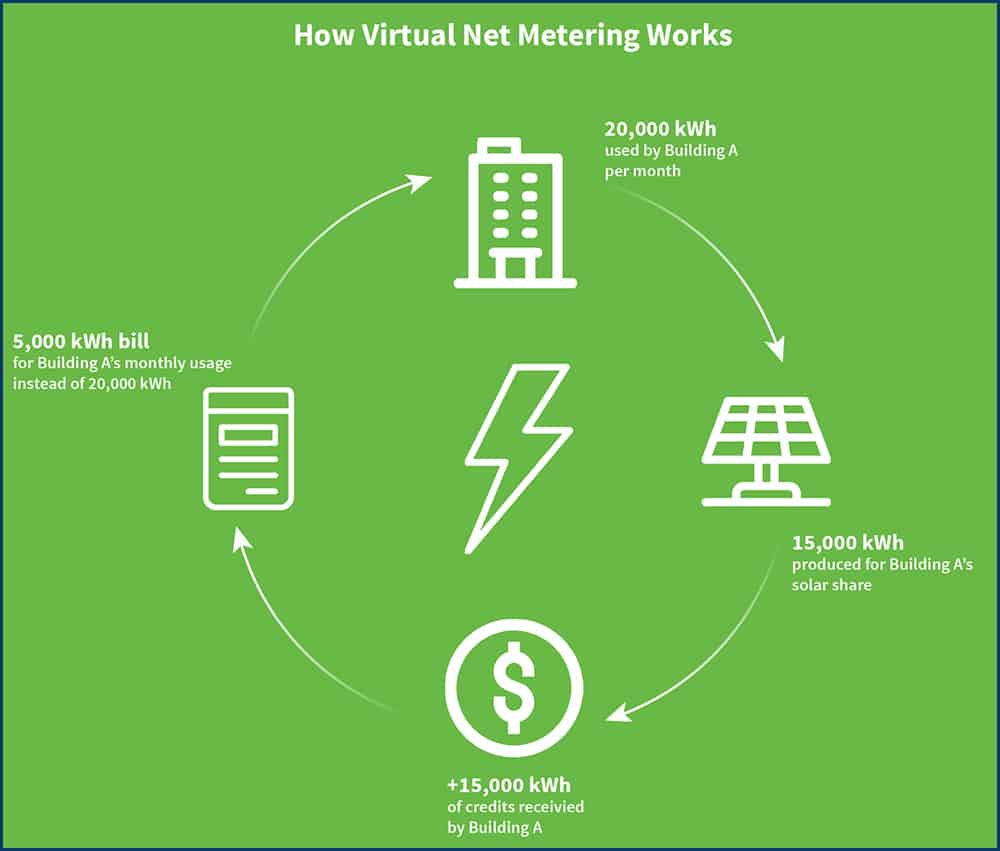 There are about 25 states and the District of Columbia that offer virtual net metering/community solar programs.  Each state has their own rules and regulations that govern them and most use these programs as incentives that are designed to move the state toward its renewable energy goals.

In late 2019, we started working on the energy procurement for a municipality in Rhode Island.  They signed a contract with us for the procurement of all the power and gas for the city buildings, parks, and streetlights.

In our discussions, we found out they had been working with a solar farm developer on a virtual net metering project.  They had worked out a plan that was going to reduce their annual budget by 35% by allocating 90% of their annual kWh usage to solar credits!

The project came online in January of 2020.  Per the terms of the virtual net metering program, the municipality was expecting to see the credits transferred on their utility bills.  They paid their electricity bills as normal over the next couple of months as well as continued to pay the developer for the project.

However, the city eventually realized that they weren’t seeing the credits subtracted on their bills. Jordan Berman, the Director of our Energy Services Division, got involved and immediately went to work to figure out what happened.

Berman discovered there was a hiccup with the utility’s billing service that was preventing them from allocating the virtual net metering credits for the first 2 months of the project.

After a few conversations with the solar developer, the utility, and the city, he was able to identify the problem and make sure the allocation was correct, the city would receive their credits moving forward, and that they would receive the credits they were owed for the months they had already paid.

Things were looking good with the project until the COVID-19 pandemic hit.

When the COVID-19 pandemic began in March of 2020, most thought it would only last for a few weeks.  As we all know this was a mirage and, as of the writing of this case study, we are still in the midst of it.

Because people were in lockdown and unable to use public buildings or go to work, electricity and natural gas usage plummeted across the board.  In fact, compared to Q2 2019, Q2 2020 saw electricity consumption drop by 11%, with 35.6 million fewer MWH used.

The case was no different for this Rhode Island city.

From March to May, the city saw its usage drop by 30% annually!  Although this would normally result in cheaper electricity bills, it threw a wrench into the city’s virtual net metering project.

Because of the reduction, the municipality was receiving 30% more credits than they could use against their electric bills.  While the plan they were on did allow credits to roll over to the following year, during this time they had an excess of credits that they weren’t able to use against their bills.

Although they could roll those $300,000 extra credits over, their fiscal year was coming to an end in June and, even with the virtual net metering program in place, they were ultimately paying the same amount since they were still paying the developer for their credits in addition to their own energy bills.

Essentially, the city had a million-dollar balance in their account that was only allowed to be used towards their energy, which would make budgeting a nightmare for the following year.  On the books, if their expected goal was $800k a year, they had essentially that same amount sitting in their account in the form of credits.

Why Companies Need an Energy Advocate

As city budgets are already razor thin and don’t have any room for unknowns, this ordeal was set to significantly complicate the city’s budget for 2021.  However, because the city had an advocate in Best Practice Energy, they could see a light at the end of the tunnel.

Mr. Berman went to the negotiating table with the utility and the developer.  He laid out the scenario in front of them and explained how it threatened the city’s budget.  Due to the unprecedented situation created by the pandemic as well as the city paying their bills while they weren’t receiving the credits at the beginning of the year, he was able to create a resolution that kept all parties happy.

He was able to successfully receive a commitment from the utility to write the city a check for $768,000, the amount of their excess credits, in August. The city was permitted to use this money for anything.  In return, the virtual net metering credits the municipality had accrued were wiped from their account.  This allowed the city to reallocate their budgets moving forward and helped to show the program’s savings on the books.

What Berman was able to accomplish here was nothing short of astonishing.  Never had we or the developer seen the utility write a check to a customer for something like this.  This is why companies need an experienced team to help them navigate the convoluted water of efficiency and renewable energy programs!

At the end of the day, we streamlined the entire virtual net metering project and made sure the city was getting the maximum value for their credits.  The project and pandemic created many hurdles, so they relied on expertise and an advocate to help guide them through the complexity of it all to achieve a resolution.

Without an energy consultant to help, this city would’ve had a very difficult job of untangling this web and would’ve been setup for budget failure in the long run.

While the benefits of efficiency and renewable energy projects are incredible, the programs themselves can be extremely complex and difficult to maneuver through and fully understand over time as the conditions change.  Our Energy Services Division acts as an extension of your business to help usher you through these programs to ensure you are maximizing the benefits and receiving what you paid for.

Contact us today for a free electricity and natural gas consultation to find out if an efficiency or sustainability project could elevate your business!

Over the last decade we've been helping businesses avoid unneeded costs on their electricity and natural gas bills by using sophisticated & tailored procurement methods. In honor of our 10-year anniversary, our 10-for-10 series highlights 10 stories about our clients and the various paths they've taken to optimize the value of their energy contracts.
Read Our Customer Stories